I forgot to mention in the last post, during the injections I had to go into the Dr’s office every other morning at 6:30 to be monitored. They checked to see how I responded to the medications. I started them all June 23rd and by the middle of the next week there was some concern that I could “do better” meaning my follicle production wasn’t as bountiful as it had been in the past. The thing with my PCOS is that it’s hit or miss. When Dr. Dhesi asked me if I wanted to cancel this cycle and start again next month I said no. Sad to say, a major concern for me was that I had already injected about $1500 worth of medicine that wasn’t paid for by insurance. I took a leap of faith and hoped that my body was just slow to respond. We continued and by Friday 6/30 I had 17 follicles that were bigger than 10mm. We were good to schedule the retrieval for July 5th! It was perfect because I had already requested the 5th to the 10th off for Maria and Matt’s Wedding!

On the 4th we went in for the pre-op info, blood work and my trigger injection! We left the office, got Donut Friend and went to our old neighbors 4th of July Breakfast. Then we did a Trader Joe’s run to make sure the house was stocked for the next few days and made sure the house was comfy and clean. Then went to Sara Bond’s 4th of July BBQ. We had to leave before the fireworks to make sure I got a good night’s rest, I imagined my follicles growing just a bit more if I got some good sleep! But it was great catching up with friends and relaxing before the big day!!

Also! Wouldn’t you know, as soon as all the IVF stuff was falling into place, we got a call from our social worker. She needed us to come to her office in Glendora on the 5th, so being the mainiacs we are, Nick and I thought “no problem”, I’ll go under around 7:30am, then after surgery we’ll get something to eat and go to the DCFS office. Or if I feel terrible we’ll cancel. That’s called concurrent planning folks!!

So sure enough we got to the Dr’s office around 6:30am. They took us took us to the OR waiting area and I changed into a hospital gown, booties and a hair cap thing. I emptied my bladder but then the gave me an IV to keep me hydrated so i had to go one more time before the surgery. Once I was in the actual OR they put me in the leg stirrups and I looked to check out the the little window to the embryologist lab. After Dr. Dhesi skillfully guides a loooooooooong needs through my vaginal wall and abdominal cavity into my plump ovaries, she’ll suck out the ripe eggs and pass them through the window for the embryologist to fertilize with Nick’s sperm. And then we’d have some Test Shoob Babies!

Before I knew it, the anesthesiologist had hooked me up to the propofol and it was lights out! I woke up with a post-it on my gown that said 15! That’s the number of eggs that were successfully retrieved! I felt so well rested, like I had slept all night. All the nurses were so incredible and sweet. After monitoring me and helping me to pee one more time, they said we could leave. We asked if we could go do normal stuff, they said yes, but I couldn’t drive and I shouldn’t make any major decisions bc of the anesthesia (hah!!) So we ran home and I changed into normal clothes (out of my sweats) since I wanted to make a good impression with our social worker. We had some time to get a bite so we went to Lavender and Honey and got coffee (I could have coffee!!!) and avocado toast (the possibility that we’ll need to save for 15 college educations hadn’t sunk in yet!). Soon after that we were on our way to Glendora, we shouldn’t have been surprised when our lady was late. We asked the receptionist to call her when it was past a reasonable amount of time. They had no idea who she was and I ended up calling the # I had for her. She said she’s was almost there, I guess this wasn’t her normal office. Anyway she finally showed up, rushed us off to a room and frantically thumbed through the pages of our file checking things off. She said we’re “mostly done” and that she’d come to do the final home inspection July 19th. We were OK with that, all we needed was a trip to IKEA for the items we had been waiting to get until we had an inspection date. We were almost done painting the crib Nick’s mom gave us!

On 7/6 we got our first update about the embryos! 12 were doing ok! One was was being watched and 1 didn’t survive.

7/10 we were told we had 4 blastocysts that were biopsied and they were watching the remaining 4 embryos to biopsy hopefully the next day.

The biopsied cells were sent off to Progenesis and about a week later we got the results that 3 were normal.

15 mature oocytes retrieved, all were injected (ICSI) with Nick’s sperm

When Progenesis looks at the chromosomes to check for any abnormalities they also let us know the sex of the blastocysts!! We ended up with 1 boy and 2 girls!

After our crazy week we headed out to the Lake Arrowhead area and had a super fun weekend celebrating Maria and Matt’s wedding! It was really beautiful and awesome and since the kids we’re “away at camp” I was able to fully enjoy all the festivities, although I still had to dance carefully so I didn’t twist my enlarged ovaries. Maria was also so sweet to give me and Nick the bridal suite to sleep in. She knew what a wild ride the week had been for us! They had a cabin already but I still couldn’t get over the fancy room they gave us! <33

Our next step in the IVF process was to get my uterine lining to be as thick and nourishing as it could be for our little “Blasts” to land on and burrow into when we do the transfer. As soon as my cycle started I began estrogen pills, 2 oral and one vaginal every day.

We continued to prepare for the landing of a foster baby too… the baby room was all set! But on the day of our home visit the social worker called at the time of our appointment to cancel. She said I could just send her pictures?? I snapped photos of all the stuff we did: the furnished baby room with crib, dresser/changing table, we had a high chair, lil potty, car seat, playpen, tons of bottles and baby clothes (when you get a baby from DCFS they are usually removed from an unsafe situation quickly and have very few if any of their own belongings) Thanks to friends, family, craigslist and my employees discount we were all stocked up. Down to the safety latches on everything, locking medicine cabinet, lowered water heater temperature and kitchen knives on a magnetic strip well out of reach of a little one.

I went in for my next ultrasound and my lining was thin. It stayed that way unfortunately and even with a last stitch effort to add more estrogen via patches, we had to wait until the following month to see if my lining would get thicker for the transfer. I decided to use my time wisely and get more healthy. I started acupuncture because a lot of people say it helps with fertility. I felt it couldn’t hurt so I went in for a total of 4 sessions. I was advised by the practitioner to eat eggs. I told her I don’t do that, that I’d been vegan for 3 ½ years. She explained to me that eating cholesterol was beneficial in helping to get the hormones I was taking into my body and work better, so I decided that I would eat eggs for a short amount of time to improve the success of the IVF. I looked on craigslist for people in my neighborhood with pet chickens who sold eggs and I found Barbara. She is a mom to 2 cute kids, 6-7 chickens, a rooster and 2 sweet dogs! When I went to pick up the eggs she asked me if I wanted to meet the chickens, at the risk of being SOOOO Portlandia https://youtu.be/ErRHJlE4PGI, I said yes. They were very well cared for and seemed happy. I gave Barbara $4 for 4 very pretty eggs. Later when telling my dear friend Chevery Robert Dickens that I didn’t think I could say I was a vegan anymore, he replied “Sometimes you have to take a life to make a life” 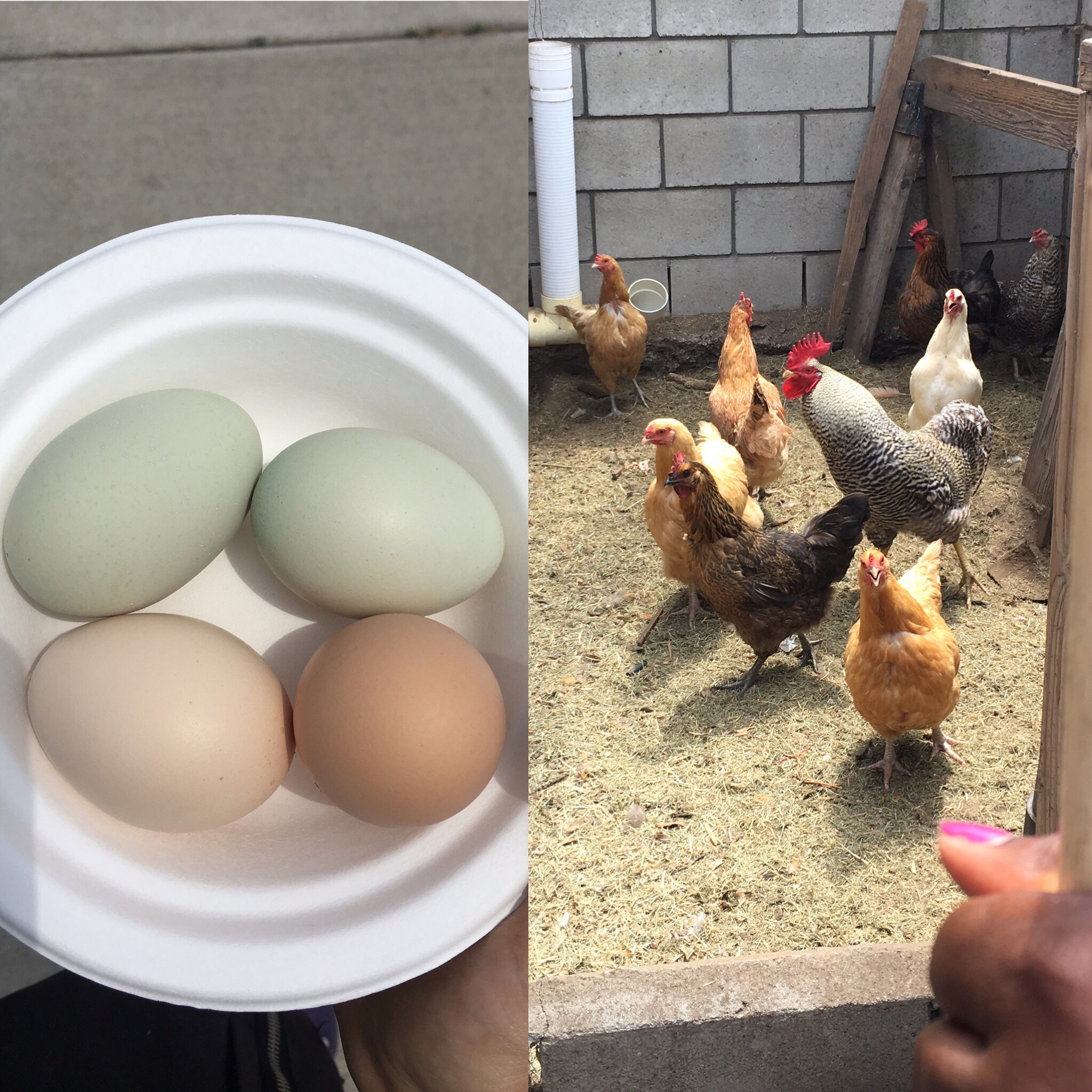 When I went in for my check up, it was working!! The hikes, the eggs, the castor oil packs on my fupa, the acupuncture, the estrogen pills/patches and all the good vibes I’ve been getting from everyone since we started Test Shoob Babies were all helping. Nick and I were so excited to hear my lining was thick enough to proceed.

I started Progesterone shots. They are intramuscular injections that go in my buttox and they are quite literally a pain in my ass. Especially trying to do them myself at work. I am not very limber and they bleed a lot. But hey this is it. I have to stick to what needs to be done and hopefully get the result we want.

We had the embryo transfer scheduled for Sept 5th!!!! There was just one little thing…. When Nick and I spoke to Dr. Baker at our initial consultation she said they usually transfer 2 embryos, because it’s more successful. Even if you end up with just one embryo that sticks. But Nick and I had it in our heads that we’ll transfer 2 and obviously they’ll both survive and we’ll have adorable boy/girl twins! Later when I spoke with Dr. Dhesi about the transfer she said we should really just do one since we had the Preimplantation Genetic Screening and that we would have a really good chance of conceiving if we transfer just 1. But when I told her how much Nick and I wanted to transfer 2 she spoke with Dr. Baker again and they said it would be OK!!!

That was it. Everything was set. Next up we transfer 2 of the embryos back to me and hope they like it and want to stay!!!