Here we are, in the midst of our first cycle of IVF (in vitro fertilization). Nick and I have been TTC (“trying to conceive” as the fertility blogs say, and I swear that’s the last time I’LL say it) for a while. It’s been quite a journey. We’ve shared with some friends and coworkers but now we’re getting into some crazy sci-fi stuff, and we think it’s fascinating and cool. We want to tell people all about it all the time, but maybe not everyone cares and it’s hard to tell. So, if you wanna know keep reading, and if not–then please enjoy the rest of your day!

Let me warn you. I might be saying things about SEX and my PERIOD etc.  These are totally acceptable to me but for some reason on other fertility related blogs grown women feel the need to say things like “tonight me and DH (dear hubby) did the BD (baby dance)..” Please understand that I find that repulsive and would much prefer to say “Nick and I had sex.” or we “did it” but that could be confusing bc we didn’t DO IT, as  in make a baby. Anyhoo. You’ll get it I hope… but no Aunt Flo niceties here, so buckle up.

About 2.5 years ago Nick and I we looking at open houses because we think that’s a  fun thing to do. I kept looking at tiny places and Nick said something smart, bc he’s a smart guy… “You should probably think about if you ever want to have kids.” or something like that. I DID want to have kids and Nick said he wanted to have kids too! We went about our newish relationship and joked about him being a stay at home dad and stuff like that. In October 2015 I was ‘late’, but instead of it being scary it was super exciting. We both realized how much we wanted to be pregnant and I decided to go off my birth control. I ended up getting my period that month and I suspected it might take my body some time to adjust, when few months passed and we weren’t having any luck, we decided to look into things.

April 26th 2016 I saw my OB/GYN and she said because of my age and how long we had been trying, we could see a specialist. She referred us to a Reproductive Endocrinologist, Dr. Baker. The soonest appointment wasn’t until JULY 1st. So we went about on a great mini-moon and amazing honeymoon and when we got home we had our work cut out for us! Lots of Dr. appointments, lots of tests, and waiting.

In that first meeting we got some instruction. I had a full blood test to check my hormones and check for STDs etc. and they tested Nick’s blood and sperm. I was prescribed Provera to induce a bleed since my cycles are pretty irregular and as soon as that started I could come in for an ultrasound and a hysterosalpingogram (HSG) test. I was told it’s a simple test that can show if my tubes are blocked by sending dye though my uterus and it will fill my fallopian tubes and spill out the ends if everything is working. The test also seems to clear blockages for some women… like Draino!

I got my period and went in to the Dr. Office on day 3 for an ultrasound, they looked at my ovaries and counted the follicles. I had a lot.

On day 10 of my cycle I was scheduled for the HSG. I started doxycycline 2 days before to prevent infection. The nurse was really nice and told me what was going to happen. The Dr. came in and began. The speculum went in, my cervix was cleaned w/ betadine and  the Dr. began to poke around. What typically happens is a catheter is inserted in the cervix and a small balloon inflates to hold the catheter in place while the liquid is pushed in. Poke poke poke… nothing, another Dr. came in and tried and couldn’t get it either. Apparently a smaller catheter was needed, they tried to call Dr. Baker but she was not available. They had to send me home w/ no HSG. The problem is that there is a specific window of time when the test can be done and we were at the close of that window. I finished out my antibiotics and waited until the next month.

We used Provera again to start, took the doxycycline again. This next attempt was a little cray. I was told to bring someone with me. Nick was busy with a school picture day and couldn’t be there with me. So I did what anyone would do, I asked my Bike Gang and Reverend Joe Borfo saved the day!  The reason Borfo needed to be there was to wheel me from the Kaiser office on the south side of Sunset, to the Kaiser office on the North side of Sunset. Apparently there’s a liability issue with a KAISER EMPLOYEE taking me across the street in a wheelchair with a catheter in my hooha. Hmph.

Dr. Baker even had a hard time getting the catheter in, I got scared she might give up, so I told her not to worry about hurting me (I’ve learned I have a pretty high tolerance for pain)  so she clamped something and used a shepherd catheter or something like that and got it in! They taped the tube of the catheter to my thigh and in my hospital gown were on our way across Sunset Blvd! The Dr. over there helped me onto the table and hooked up the dye and we watched it on the monitor as it flowed through my uterus and fallopian tubes and out the ends. It was really pretty. 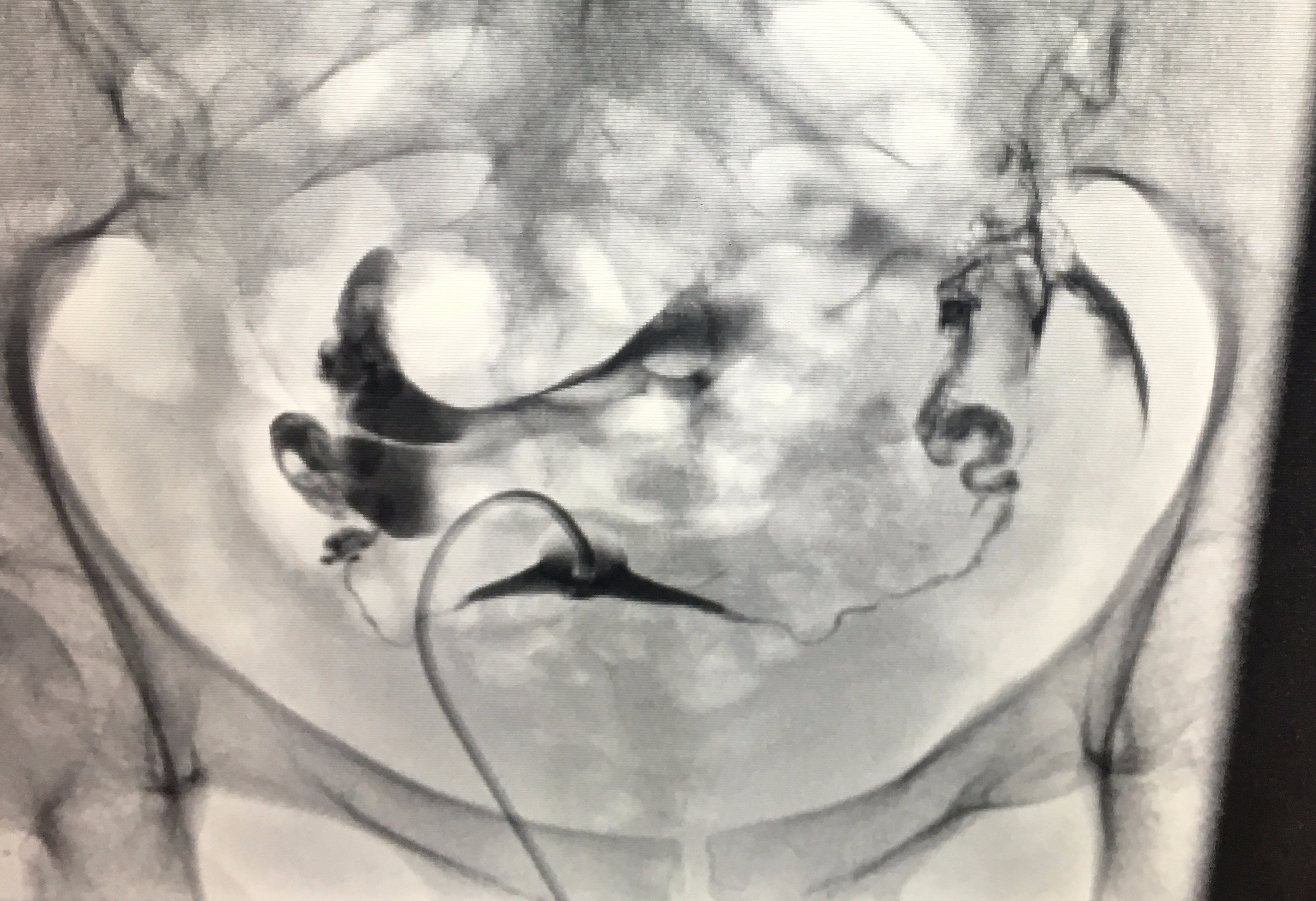 Anyway, this awkward and mildly crampy procedure was followed by Vegan Chilaquiles at Millie’s (where Pauley Shore goes for breakfast apparently!!) I was pretty happy with the way the day turned out. Having the support of a friend made it much easier!

After we completed all these crazy tests we met with Dr. Baker again and she gave us a diagnosis. I have Polycystic Ovarian Syndrome (PCOS). Nick’s tests all showed that he was fine and had normal healthy parts and made normal healthy sperm. There is not really a cure for PCOS, it usually doesn’t even get diagnosed unless someone is trying to get pregnant. Something like 10% of women in the U.S. have it. Some women have excess facial hair, or weight gain. The only symptoms I seem to have are acne and irregular periods.  PCOS is the leading cause of infertility in women, BUT there’s still hope for me, in the form of pills and injections and a patient and willing husband.

Next, I’ll tell you all about our treatments so far and where we’re at now!! :))

One thought on “Test Shoob Babies”